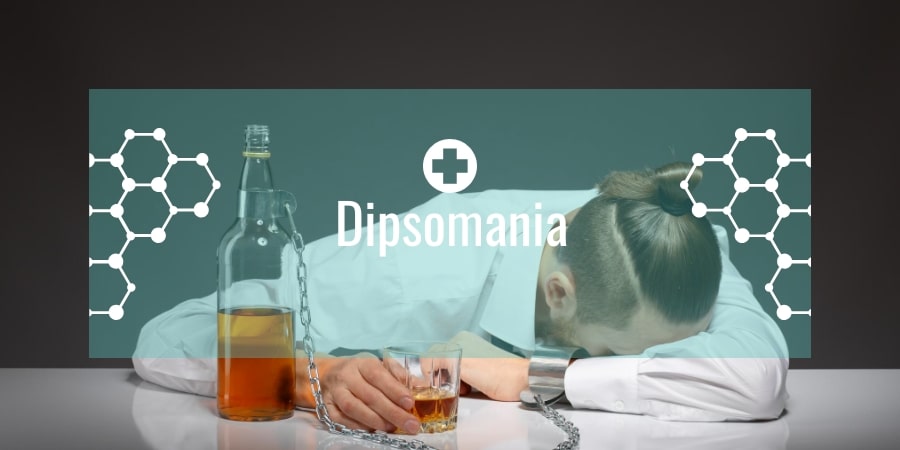 According to the tenth revision International statistical classification of diseases and health related problems (ICD-10), in its section on the disorders caused by drug use and psychoactive substances, episodic alcoholism is grouped within the category conditions with dependency syndrome.

In other words, dipsomania differs from occasional drunkenness (intoxication) and the harmful use of alcohol (when continuous consumption of drinks but he can give up) because there are three or more of the following in a span of 12 months:

– Decreased ability to control or stop the consumption of alcoholic beverages.

– Presence of withdrawal symptoms during periods when the stimulating substance is abandoned, it generates new relapses.

– Progressive increase in the amount or concentration of the drinks to achieve effects originally produced with lower doses (resistance to alcohol).

– Moving away from other sources of pleasure or interests because of substance use.

– Persistence in the consumption of alcohol despite adverse consequences caused physically and mentally.

Moreover, many specialists agree that while the person with continuing or chronic alcoholism, being poisoned every day, acting on a “passive”, ie social relations gradually wears away and exposes your body to severe damage caused by their drinking, the dipsomaniac, in contrast, has social behavior during withdrawal may appear normal, but in the episodes in alcohol becomes “explosive” does not control their behavior and violent, so that s involved in fights Uele and motor vehicle mishaps in life-threatening.

On this aspect is very enlightening research coordinated by specialists from the National Institute of Psychiatry Ramon de la Fuente, in Mexico City concerning the relationship between alcohol consumers and the reasons for coming to hospital. The document, which was based on observation of 4.950 patients attended between 1986 and 2003 to hospital units located in Mexico City, Acapulco and Pachuca, shows that dipsomaniacs come increasingly to the Department of Trauma due to accidents or fights, while Patients with continued use are referred to the emergency of physical complications resulting from prolonged intake as heart or respiratory ailments.

As regards the profile of dipsomaniac, we can say that usually it is young people from dysfunctional families (in the prevailing poor communication and emotional ties deteriorated) and have poor relationships with parents tend to feel isolated, are solitary, shy, depressed and hostile behavior have situations that seem compelling. They may also exhibit self-destructive and sexually immature.

The most distinctive aspect dipsomania, which is the alternation between periods of sobriety and excessive intake of alcoholic beverages, has tried to be explained by recent discoveries, as it has been found that a gene might be responsible for some individuals consume large amounts of fluid periodically, not just alcohol, with no disease to explain this phenomenon, such as dehydration or diabetes (high blood sugar levels due to lack of the hormone insulin).

According to this hypothesis, the habit of drinking alcohol should start to social conditioning and emotional problems, and then take root in the body begins to produce addiction, which occurs because the nervous system “get used” or adjusts the presence of this substance. Although this version offers an interesting response to the unknown, is still under study and there is nothing definitive about it.

It is a form of alcoholism in the alternating periods of prolonged abstinence with other excessive and uncontrolled consumption of alcohol. Often associated with accidents and acts of violence, which represents a significant risk.

Alcoholism or addiction to the consumption of alcoholic beverages is a widespread social phenomenon and alarming in recent decades, so much so that a large number of statistical studies have shown that this dependence is related, worldwide, with nearly half of the traffic accidents, 15 to 20% of workplace injuries and about 50% of homicides.

As if this were not enough, uncontrollable alcohol intake is associated with a wide spectrum of physical problems (malnutrition and damage to liver, heart, brain and digestive system), mental (depression, anxiety and aggressiveness), labor (low efficiency and loss employment) and socioeconomic (in addition to money spent on drinks should be noted the breakdown of families and the enormous costs involved in consultations and hospitalizations), all without mentioning that, unfortunately, its incidence is increasing, especially among the population young.

Experts believe that there are two types of alcohol dependence, a psychological, more related to emotional problems and relationship that the addict has suffered throughout his life, and a physical that revealed, among other things, because the when the person stops drinking alcohol introduces the “withdrawal syndrome”, characterized by tremors in the fingers, tongue and extremities, sweating, tachycardia (rapid pulse), anxiety, irritability, nausea, vomiting, poor appetite, insomnia and even visual or auditory hallucinations (delirium).

It should also be noted that within the physical dependence on alcohol are two different ways of drinking, a continuous, in which the patient often needs to consume alcoholic beverages or daily, and other episodic dipsomania in alternating stages relatively prolonged abstinence (may last a week or more) with severe relapses.